To Snore or Not To Snore, That is The Question

Professional Services for All Your Sleep Technology Equipment

To Snore or Not To Snore, That is The Question

Snoring is the bane of many a bed partner.

Snoring is ubiquitous, effecting men more than women and increases in frequency as we age. In women snoring becomes even more common in the postmenopausal state.

What causes snoring? Our upper airway, defined as the region from our nasal pharynx (back of the nose) to the epiglottis (the structure just above the trachea that closes off the airways when we swallow). This area is made up of soft tissue that can collapse, thus partially to completely obstructing the airway. Consequently, large tongue, tonsils or adenoids can contribute to the development of snoring. Increase in neck size, which often implies increase in fatty tissue in the neck, can also narrow the upper airway. Any low muscle tone can also be causative, as can be seen in neuromuscular diseases and when thyroid hormone is abnormally low. Often snoring is noted to be positional, as sleeping on the back allows gravity to collapse the upper airway, especially allowing the tongue to fall back into the throat.1

So how loud and disruptive is snoring? According to the Guinness Book of Records the loudest snorer was measured at 93 decibels! 2

The loudness of sounds our ears hear is measured in decibels. O decibels are considered to be the softest sound perceivable. Generally, the human ear perceives a 10-point increase in decibels as twice as loud.3 For comparison purposes normal speech is measured at 60 decibels and a vacuum cleaner at 75 decibels.4

With the above noted, it is not surprising that many wealthy people even have snoring rooms, where the offender can safely sleep without occurring the wrath of the innocent victim. Some people have taken this to the extreme; in the last few years a wife admitted to attempted murder of her husband because of his snoring.5

Snoring, which may only be disruptive noise, can also be a sign of sleep apnea. Sleep apnea untreated can cause potentially significant health problems. So remember if you are lucky enough that your bed partner doesn’t do you in for snoring, it doesn’t mean you should sleep blissfully. 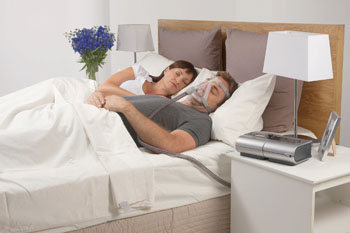 CPAP is generally used to treat mild obstructive sleep apnea by preventing the airway from collapsing during sleep.

BiPAP is short for Bilevel Positive Airway Pressure and this machine has a very similar function to CPAP machine therapy.

PAP masks help patients to breathe through their mouth, nose or both and provide relief from sleep apnea symptoms.